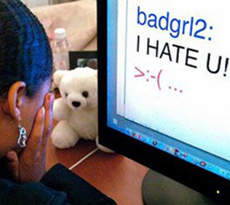 The Cyberbullying is, therefore, a cyber-violence by multiple forms, which can be divided into different types (Willard, 2007a, 2007b, Pisano, Saturno, 2008), sometimes, and in some cases, with areas of overlap between them:

FLAMING – This term indicates electronic messages, violent and vulgar, designed to elicit “battles” online verbal, between two or more contenders, which facing “equality of arms” (the power is, in fact, balanced and not always is a victim as in traditional bullying) for a period of time determined by that shared online.

The flaming may be, in fact, limited to one or more conversations in chat or characterize participation (especially adolescent males) with interactive video games on the internet (game).

In the latter case, for example, can be targeted with insults and threats, beginners who, under the pretext of errors related to inexperience inevitably become   discussed aggressive.

The fun seems to be linked, then, not only to participate in the interactive game, but above all to the pleasure of insulting or threatening the newcomer (new user) who, feeling protected by anonymity and the subsequent, alleged, invisibility, he may respond in so strongly aggressive provocations, feeding them.

And ‘well, however, point out that a long sequence of messages insulting and threatening (flame war) could, in some cases, precede a real aggression in real life.

Properties: intentionality, symmetrical escalation (up one position contenders fighting for the assertion of power), limited duration activities on the shared line.

Characteristics: deviant behaviour (the person who, breaking with his behaviour, a norm violates a set of rules, implicit and explicit, shared by most of the people who belong to a specific system, family, school, society).

Unlike what happens in the flaming, here are the properties of recognizable persistence (Aggressive behaviour is repeated over time) and asymmetry of power between the cyber-bully (or cyber-bullies) and the victim.

It is, therefore, an unbalanced relationship in which, as in the traditional bullying, the victim is always in one position down (Watzlawick, Beavin, Jackson, 1971), undergoes, that is, passively harassment or, at best, tries, generally without success, to convince the persecutor to put an end to the attacks.

It can sometimes happen that a victim to replicate offensive messages communications with equally rude and aggressive, but, differently from what happens in Flaming, the intent is only to put an end to the harassing behaviour.

In some cases, the cyberbully, to strengthen their offensive activities, it can also involve their online contacts (mailing list), who, perhaps without knowing directly target the student, lend themselves to participate in the assault on line (we could define the phenomenon “Harassment with voluntary recruitment” Pisano, 2008).

Properties: intentionality, complementary relationship rigid (up one position in the persecutor, victim in one position down), persistence, and sometimes stabilized by the active contribution required of other network users (voluntary recruitment).

Characteristics: criminal behaviour (person who violates a provision contained in the Criminal Code).

CYBERSTALKING – When the harassment became more insistent and threatening and the victim begins to fear for their physical safety, the offensive behaviour took the name of cyber-persecution. It ‘easy to see the cyberstalking in the context of highly conflictual relationships with peers or in the case of romantic relationships broken.

In this case, the cyberbully, in addition to threatening the victim of physical assault can spread confidential material in its possession (sexually explicit photographs, video clips intimate, personal manuscripts) in the network.

DENIGRATION – The objective of the cyberbully is, in this case, to damage the reputation or friendships of a peer, spreading online gossip and / or other offensive material.

The cyberbullies may, in fact, post or publish on the Internet images (photographs or video) altered the victim, for example, changing the face of the student body or the target in order to ridicule, or making the protagonist of sexually explicit scenes, through the use of Photoshopped\altered pictures.

In these cases, the peers that receive messages or viewing pictures or video clips on the internet are not necessarily victims (as, however, occurs mainly while harassment behaviour and cyberstalking are perpetrated) but spectators, sometimes Passive cyberbullying (when you just look at), the more easily Active (If downloading – download – material, report it to other friends, the comment and the vote).

So, unlike what happens in cyberstalking, offensive and intentional activity of the cyberbully may take the form of a single action (e.g. publishing a doctored photo of a classmate), capable of generating, with the active, but not necessarily required , of other internet users (“involuntary recruitment,” Pisano, 2008) spillover effects not predictable.

Recall, finally, that the denigration of cyberbullying is the form most commonly used by students against their teachers: there are, in fact, video clips, grossly offensive, on the internet, bearing scenes from the life in the classroom. In some cases, the representative scenes are obviously false and, therefore, re-built ad-hoc by the student, sometimes they are, unfortunately, true.

IMPERSONATION - If a student violates the account of someone (because he got consensually password or because he managed, with appropriate programs, to identify it) can pass himself off as this person and send messages (E-mail) with the aim of giving a bad image of itself, create them problems or put in danger, damage its reputation or friendships.

Consider, for example, the case of the student who, after having hacked the account of a peer, sends email from the owner of the unaware, with easy to imagine the consequences, threatening messages to classmates or teachers.

OUTING AND TRICKERY -It is understood by the term “outing” a form of cyberbullying through which the cyberbully, having “saved” (recording data) spontaneous confidences (outing) of a peer (SMS, Chat, etc.), or confidential image data and intimate, decide at a later date, posted on a blog and / or disseminate through E-mail.

In other cases, the cyberbully may request, through deceit (trickery), the “friend” to share online secrets or embarrassing information about yourself or another person and then disseminate them to other users on the network, or threaten to do so if you do not make available to satisfy its demands (and sometimes sexual).

The cyberbully can therefore initially have a balanced relationship with the future victim, or at least pretend to have it, and then take a position of prevarication – one up – and count on the active contribution but not necessarily required of other internet users.

EXCLUSION – The cyberbully decides to exclude a peer intentionally by a group online (“buddy list”), a chat, a game or other interactive environments protected by a password. Sometimes students to indicate this behaviour use the term “ban”.

It ‘good to point out that the leadership of a young student is currently determined not only by the contacts he has in real life but also on the number of “friends” reachable online. The exclusion is, then, a severe punishment, given by peers, which resulting in a net reduction of friendship connections, reduces popularity, therefore, power.

Aftab (2007) and Smith (2007) puts also between different forms of cyberbullying, including the: 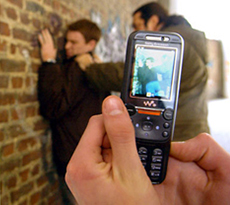 CYBERBASHING O HAPPY SLAPPING - A guy or group of guys beat or damage as a slap to a peer, while others take up the aggression with the videophone.

The images are then published on the internet and displayed by users that the network provides, despite not having directly participated in the event, an occasion for sharing online (can comment, open discussion, vote for your favourite video or more “fun,” advise their customers the vision to others …).

DIFFERENCES BETWEEN BULLYING AND CYBERBULLYING.

From the analysis of different types clearly shows that, unlike what happens in traditional bullying, almost always by prevarication through digital actions constitute illegal conduct, actions, namely, that by violating the provisions contained in the Criminal Code (ex: 615, 594, 528, 600 b) and Privacy Policy (ex: art. 161, DL 196 of 2003) may involve criminal penalties and administrative.

Without getting into specifics of the relationship between bullying, cyberbullying and youth crime (Pisano, Saturno 2007), which are characterized by their complexity boundaries uncertain and confused, we will merely note the possibility that these groups may have overlapping areas (Tab. 1) and to focus our attention exclusively on the differences between “bullying off line” and ” bullying online. “

These categories although unrelated to the presence of a common ancestor, aggression, have, in fact, many areas of divergence (Willard, 2007; Pisano, Saturn, 2008):

When they are present, may also assume a function passive (If only detect, in their E-mail, SMS, Chat, cyberbullying directed to others) or active (If downloading – download – material, report it to other friends, the comment and rate it, spreading it). The active contribution can be provided at the request of the cyberbully (voluntary recruitment) or, at the push autonomous, that is, without having received specific and express requirements (recruitment involuntary).