If we were to take the definition literally, applying the penal code strictly, any form of bullying should be considered as delinquency.

Consequently, the minor (in certain cases) or the parental authority could sue the student who carried out any form of aggressive behaviour, even the slightest one, directing it, according to the age, in the administrative/civil procedure (infra-fourteen-year-olds) or the penal one (minors who have reached the age of fourteen but not eighteen yet) as provided for by the Juvenile Court.

It is legitimate to ask oneself if all this is correct.

We obviously think it should not, and that common sense should help adults (teaching staff, parents and operators) to evaluate the quality and quantity of aggressive behaviour which even if filed abstractly under some criminal case in point, when it does not produce physical or serious psychological damage and/or grave and/or durable damage in the victim should be codified as bullying acts.

Vice-versa, if the aggressive behaviour produces grave effects (subjective and/or objective ones) in the victim, teachers and experts called to examine it, should take into account not only the right consequences that the involvement of the juvenile judiciary could have on the minor who committed the act, but also and especially the need of justice of the victim and the community who could perceive, in the absence of appropriate and adequate intervention concerning the incident, the breaking of the social pact of human society.

STherefore, in the scholastic context, what is to be considered as criminal behaviour are for example fights and beatings among students, the destruction of school furnishings, sexual harassment, rape attempts. 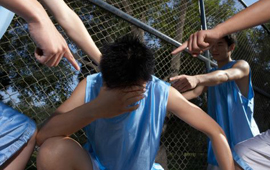 That is to say all behaviour which produces physical and psychological damage, as mentioned above, grave and/or durable to the victim and the community.

However, it has to be clarified that within criminal behaviour, behaviour which could have produced grave damage has also to be considered, if inexperience or chance had not saved the victim, as for example:

a. throwing chairs or other objects through school windows to hit a student who, luckily and eventfully, is able to avoid the aggression;

b.  throwing a compass or other pointy or sharp objects on the head or other parts of the body of a student who manages to avoid it just at the last minute;

c. using a bar to hit a student who manages to duck the blow;

d. turning over or trying to turn over the drinks dispenser on a student who manages to avoid the impact.

To operate an adequate distinction it is important to consider the fact that all behaviour, assumed as pranks and play, where the typical elements of bullying are absent, such as the persistence of oppressive behaviour, intentionality and the asymmetry of power between the victim and the tormentor (Olweus, 1993; Coie e Dodge, 1998; Smith et al.1999) are to be listed among the category ‘pranks’.

In fact, whereas in bullying the roles are rigid and rarely mutable, each actor (bullies, victims, spectators, followers, defenders, externals) shares expectations on the other’s behaviour and all the participants involved in the relation move within an unwritten plot of rules which each of them follow to be able to maintain an identity (at times a negative one) in the peer group.

The term ‘pranks’ instead, refers to behaviour which does not contemplate rigid roles in the relation, and most of all, what is absent is the intentional will to damage the others or hurt them.

Evidently, in these cases no application to the Court or any anti-bullying acts are necessary. Eventually, both the students can be reprimanded or sanctioned for the improper behaviour shown.

It is important to trace the boundaries also between bully behaviour and violent explosions related to psychiatric pathologies frequent in the years of growth, such as behaviour disorder and provocative disorder (DSM IV, TR, 2002).

These pathologies, which share with bullying solely the theme of aggressiveness, need particular and specific kinds of intervention (the student is sent to the social-sanitary structures of the territory for individual, group and family psychotherapy, and in certain cases, medication with psychotropic drugs is necessary) which have nothing to do with the ones carried out with adolescents who behave with arrogance and abuse of power.

By examining the criteria which involve the classification of provocative oppositional disorder (Table 1.) and behaviour disorder (Table 2.) it can be noticed how easily children and adolescents affected by these psychopathologies can be ‘mistaken’ for ‘bullies’.

A negative, hostile and provocative way of behaviour which lasts at least 6 months, during which 4 (or more) of the following have been present:

Note: The criteria can be considered satisfied only when the behaviour appears to be more frequent than what is typically observed in subjects who can be compared by age and level of development.

B.  The abnormal behaviour causes the significant clinical compromise of the social, scholastic and working functioning.

C.  The behaviour does not occur simply during the course of Psychotic Disorder or of Behaviour Disorder.

A. A repetitive and persistent way of behaving where the fundamental rights of others or the main norms or social rules appropriate to the age are violated, as shown by the presence of three (or more) of the following criteria in the 12 preceding months, with at least one criterion present in the last 6 months:
Aggressions towards people or animals

B.  The abnormal behaviour causes a significant clinical compromise of the social, scholastic, and working functioning.

C.  If the subject is over 18, the criteria for the Antisocial Personality Disorder are not met.

So as not to overlap the category of bullying with the psychopathology one, we shall briefly outline the main differences:

a. whereas psychopathological behaviour is mainly involuntary, what defines bullying is intentionality. This means that the ‘bully’ can choose how to behave, unlike the subject affected by psychopathology, who becomes aggressive and whose behaviour is ‘determined’ generally by psychological and physiological processes which can hardly be controlled;

b. while the subject who is affected by a psychopathology generally shows a deficit in the empathic processes, the ‘bully’ does not use emotional intelligence intentionally (Goleman, 1995) because he needs to manipulate situations to gain the maximum personal advantage;

c. while the ‘bully’ ignores the unhappiness of his victims, the subject affected by psychopathology does not have consciousness of the facts;

d. while the ‘bully’ has an acceptable quality of life, (he studies, sometimes with good results, does sport, goes out with friends, has sexual partners, ecc) the subject affected by psychopathology generally meets a significantly clinical compromise of the social and scholastic functioning;

f. while the ‘bully’ can count on the co-operation of one or more followers (friends he meets even out of the scholastic context) who help him prevaricate on others, the subject affected by psychopathology is generally alone, at times supported by an equally problematic student or used, because of his symptoms, by the spectators to disturb students and teachers.

It is important to reaffirm that if in presence of bullying it appears indispensable to plan an intervention which involves the whole scholastic system (Integrated Scholastic Policy), in situations which are characterized by the presence of students affected by psychopathologies, it is indispensable to send the minor and the parents to a Centre specialized in the years of growth.

In this case, if the parents do not co-operate, or are not in the condition of co-operating, it is appropriate to take into consideration the possibility of activating the minor power of attorney at the Juvenile Court, so that it could arrange adequate socio-sanitary interventions through administrative and civil measures.